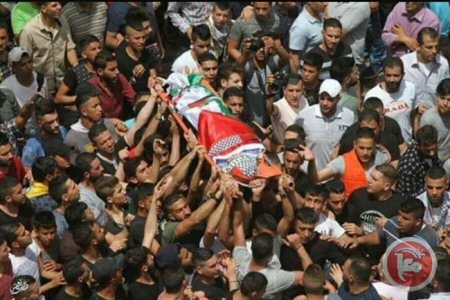 Thousands of Palestinians in the Gaza Strip and the occupied West Bank marched on Friday, in the funerals of the two Palestinian teenagers who were killed by Israeli forces during protests on Thursday.

In the northern West Bank village of Iraq Burin, in the Nablus district, crowds set off from the village mosque, following prayers towards the village’s cemetery where 16-year-old Ali Omar Nimir Qeino was laid to rest.

Mourners chanted Palestinian national slogans in support of Qeino, promising revenge against the Israeli occupation. Palestinian flags and flags of the Fateh movement were waved during the procession.

Meanwhile, according to Ma’an, the funeral of Amir Abdul-Hamid Abu Mosa’ed, 16, set off in the central Gaza Strip following Friday prayers.

Mourners set off from the al-Mughazi refugee camp’s mosque towards Abu Mosa’ed’s family home, then to the camp’s cemetery where he was buried.

Abu Mosa’ed was killed by Israeli forces at the eastern borders of al-Bureij refugee camp on Thursday.

The two teenagers were the third Palestinians, after 16-year-old Musaab al-Tamimi, to be killed by Israeli forces since the beginning of the year.