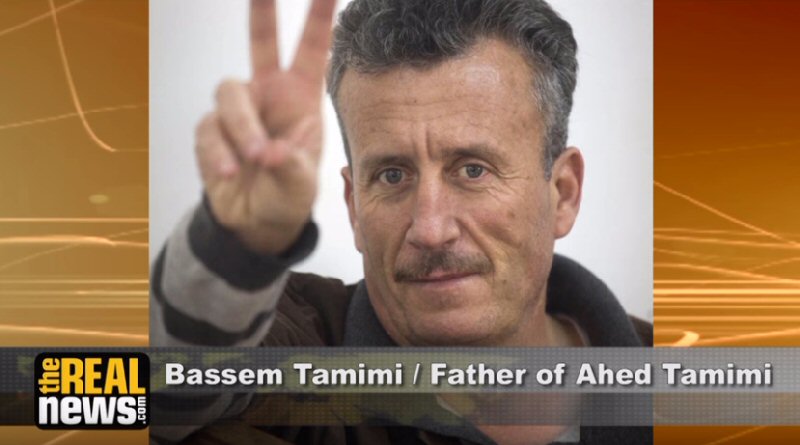 AARON MATÉ: It’s the Real News. I’m Aaron Maté. Last week, 16-year-old Ahed Tamimi was arrested by Israeli forces at her home in the occupied West Bank, joining hundreds of Palestinian children arrested by Israeli forces each year. Ahed was seized just days after a video went viral of her confronting an Israeli soldier. Just minutes earlier, Israeli forces had shot Ahed’s 14-year-old cousin at close range in the face, leaving him in a coma. On Monday, an Israeli court ordered Ahed, her cousin, and her mother, who was arrested when she came to visit Ahed, to remain behind bars for at least four more days. Bassem Tamimi is Ahed’s father and a long-time Palestinian activist. He joins me now. Welcome, Bassem. For those who aren’t familiar with your daughter’s story, can you explain to us what happened last week when she was arrested?

BASSEM TAMIMI: Thank you for give me the opportunity to call the police of Palestine, to our friends, and our people there. I highly appreciate it that. Last week, after the video that you talk about, around three, four morning, 19 of December, we wake up between three, four morning and knock on the door sounding grenade, tear gas, Shah soldier shouting. I open the door, they was very angry and nervous, soldiers and border police. They enter the home and they told me to bring all the family in the living room. I bring them, ask them to come, I wake them up the children. Then they told me that they come to arrest. Hello, you heard me?

AARON MATÉ: We can hear you, yes.

BASSEM TAMIMI: They ask them to change their clothes, to wear something warm. They don’t tell her mother to go with her to the room. They took her by two female soldiers. She wear her clothes, took her outside. In the first three, four minutes I was handcuffed and outside the home. Then they started searching in the house, everything upside down. They took our computer, laptop, cameras, USB, any electronic devices, and then they took our phones. My son Mohamed, 14 years old, refuse to give him the phone. Six soldiers was on him. By force, they took the phone.After that, another 40 minutes, we go out, we follow, we found around ten, eleven Israeli military vessels. We call for Ahed to shout, she responded from one of these Jeeps. She said, “Yes, I’m real. I’m fine. I will keep silent, don’t worry.” Morning, my wife went to the police station as they told us, to be with her, in the interrogation, and with the lawyer. Then they stop the man, and both her and went to visit her and they took her to jail.The second day, they came and dred my cousin Naji, my brother Naji, and they arrest him. Daughter, 20 years old, Noor, they took her to the investigation. We ask for a court to release them. They refuse and they detain them until last Monday. During these days, Ahed and Narma and Noor in the same jail but in different sections. Narma and Noor in a small, dirty, without-anything-for-life cell. Broken windows and it’s very cold. And they isolated Amang in the section full of Israeli criminal female prisoners. Not in the same room but around them the rooms for these criminal prisoners.They took Ahed to another jail for investigation. They put her in one isolated cell with control by the, monitored by cameras all the time. Then they want to make her weak and to force her to speak. She refuse to tell them her name because she don’t accept that authority of this police officer in the investigation. And I had keep silent and challenge them in this way. We went to the court, they refuse to give them a decision for release. They give them another detain for another two days. Tomorrow it’s that the ten days and they postpone the court too. We will see what will happen. We don’t trust this court, because it’s part of the component of the occupation. It comes to help that probation to punish the Palestinian. It’s not for justice, it’s for injustice.

AARON MATÉ: Bassem, so just to recap, because we’re speaking to you by phone, so just in case anybody had a hard time hearing. So, after they arrested your 16-year-old daughter, then when your wife, Narma, when to go visit her in jail, they arrested her. And they since raided and arrested her 21-year-old cousin, Noor. So, before we get into more of what is happening now, can we just go back to that video that went viral across the world? Where your daughter is seen confronting Israeli soldiers who are in your village and occupy the West Bank. What was happening there?

BASSEM TAMIMI: What’s happening there it’s they, if you see the soldiers, they are just two soldiers, yes? It’s not common sense that two soldiers without, where is the other group of soldiers? The soldier and every group is five soldiers or six soldiers moving together. But why these two soldiers are coming alone? Firstly, all the clashes is around our home. All the time they are shooting, for two, three days of this. Even the soldiers shoot my son in his leg and they injured him. The second day they shoot him in his head and they broke his hand. Before the moment that I had pushed out of our home, these two soldiers are coming from the blast where our cousin Mohamed shoot in his head, by his face, by a rubber bullet. And he is in a bad situation and he was in coma.

AARON MATÉ: So this is Ahed’s 14-year-old cousin, who just before that video of Ahed slapping the soldier in the face, he was shot in the face with a rubber-covered bullet.

BASSEM TAMIMI: Yes, a steel-coated bullet. This soldier, after that, we hear that he was shot and we would be able to see that he may be killed. I think this is the same soldier who shoot him because he was coming from the back of my room. He jump from the wall and he coming alone with the other soldiers. Without their groups, he comes from the same place that his boy was shot. And we believe that this soldier he’s the same soldier who shoot our cousin. And if you follow the video, you see that he is not a moral soldier or officer. He was shocked, if you see his respond, because he is shocked, because he see that the small child he stands in front of him with his blood. And he come to hide and to shoot another people, to hide in our home. And the other soldier was shooting tear gas, rubber bullet, and live ammunition to the other people. In this situation, what will you want us to do? To give it all for this soldier and make tea for them? To lose our home, to kill the people? It’s common sense.But you know, the Israeli society is a sick society. They don’t like their soldier to appear like this. They want their soldier to appear how they kill the children, how they shoot the people, how the animals, the people houses, shooting the people in their homes. This is the image that they like. And this image they don’t like for that they want to punish Ahed. If this video show that their soldier is a moral and a polite and a very kind soldier, and this give them that they’re imaging the world become good, why they arrest her? Why?

AARON MATÉ: Bassem, speaking of the Israeli response, let me get you to respond to some of what we’ve heard from prominent Israelis about Ahed’s arrest. The Education Minister of Israel, Naphtali Bennett, said, “She should finish her life in prison.” And a prominent Israeli columnist, Ben Cuspis, he wrote in the newspaper Maariv that “in the case of the girls, we should exact a price at some other opportunity in the dark without witnesses and cameras.”

AARON MATÉ: What’s your reaction to hearing that speaking about your daughter?

BASSEM TAMIMI: I don’t toy in it, see a normal reaction because they come from the north. The mentality, the belief, the thought, the value of this society. This is the value. This is the same society who create and produce this terror who burn…family in their home. This system is the same system and this is the same regime that create and produce these soldiers and air force who shoot and kill children in Gaza. This is the normal issue that we have from these sick people like Bennett or Ben Cuspis or all of these people. And I don’t know which beast you can gain if you negotiate these people and this regime and this society because if they respond to a small child like this, what they will do if we, we will cheat ourselves if we feel that we can get anything from the negotiation of this government or this regime.

AARON MATÉ: Bassem, finally, let me ask you. You’re no stranger to protest. You’ve been organizing for years against the theft of Palestinian land in your village by Israeli settlers, and also of the local water resources by Israeli settlers. But I’m wondering, what was it like for you seeing your 16-year-old daughter standing there in an Israeli military court? What was that like for you?

BASSEM TAMIMI: It’s hard. I can’t talk with her. They surrounded her to make a wall between me and her, not to see her. The people in all after the media take photo, and they show the photos and the video, they show the face of my daughter before me. It’s not, I know that it’s a very bad situation inside the prison, I know the situation there. I am worried. I worry about what will happen with her in the hands of these extremely terrorist people.I worry because my sister killed inside an Israeli military court, like this court in 1993. I am worry about my family, my daughter, my cousin, my niece, my wife. Everyone who come to this court, I all the time become, very angry and nervous and stressed, because I told you my memory will, show and work up to the time they kill my sister inside the military court like this. I don’t trust this court. I don’t believe there is, if there is any kind of justice in the occupation, but I believe my daughter, my wife and my niece is very strong, and they can, be safe by their self confidence and by their challenge in front of these extreme regimes.We believe that at the end, we will continue struggle but at the end the occupation will fail and we can keep silent and the occupation, our daughter and responsibility to resist. I have this example for her generation, and she will continue needing this generation and give them the example in the way tourists and until we have our freedom, and have our rights. Have the opportunity to participate in all the freedom fighter in the world, to build, the civilization with this justice and freedom for everyone in this world.

AARON MATÉ: Bassem, if I can just tell you that it’s that strength that you describe in your daughter and in the rest of your family that has inspired people all around the world. And so we thank you, and we thank you for joining us today. Bassem Tamimi-

BASSEM TAMIMI: Thank you, thank you.

AARON MATÉ: Bassem Tamimi, the father of Ahed Tamimi. Ahed and her mother and cousin are still in Israeli military prison. Bassem Tamimi is a longtime Palestinian activist. Thank you, sir. And thank you for joining us on The Real News.

Also in IMEMC interviews — Omar Barghouti on BDS: How Effective Is It?