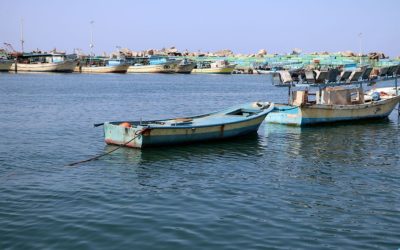 GAZA, Monday, July 15,2019 (WAFA) – Hassan Qassem’s family failed to find a safe and clean swimming area along the shore of Gaza City to swim in because of the pollution of the sea with sewage.

The seashore is the only natural relief for the two million people living in the Gaza Strip in light of the continuing electricity crisis and the 13-year-long Israeli siege.

Despite encouraging reports of a drop in the rate of pollution in the sea after increasing the hours of electricity supply, this, however, has not been achieved and the problem persists.

Video showing sewage being pumped into the sea in Gaza. This clip was taken in June of this year.

Qassem, 39, from Sheikh Radwan, east of Gaza City, brought his seven-member family, mostly children, to the Sudaniyeh seashore but where shocked to see that the color of the water was dark brown and it smelled bad.

“The children insisted that we go to the sea for the summer vacation and due to the heat and power outages,” he said. “But the disaster was the pollution of the sea and therefore I prevented my children from swimming for fear for their safety and health,” Qassem told WAFA.

The problem of the sea pollution with sewage is mainly due to the continuation of the electricity crisis in the Gaza Strip since 2006, and thus the municipalities pump thousands of liters of untreated sewage into the Mediterranean Sea.

Some people do not care that the sea is polluted with sewage and they go for a swim along with their children because they cannot afford to rent private cabins placed along the shore.

The beaches of Gaza are crowded with thousands of vacationers every day to escape the heat of the summer and the long hours of interruption of electricity from their homes.

Health authorities warn of the transmission of bacteria, parasites and viruses to vacationers because of the pollution of the sea.

Along the Gaza Strip’s 40 kilometers coastline, most areas are not suitable for swimming. Signs warning of swimming or fishing have been posted along the beach.

In general, the majority of north Gaza and Gaza governorate beaches are bad for swimming, as well as the south of the Gaza Strip where the situation is slightly better but remains relatively bad, while the best area for swimming in Zouaydeh and Deir al-Balah in the central province where pollution is low.

The problem of the sea pollution is not ed to the people, but also for those who leased rest areas from the municipalities for a large amount of money. Some of these people told WAFA that they may not be able to pay the salaries of their workers this year, pointing out that people cannot stand the smell of the sea and the sewage pollution.

Since the start of the problem of pollution in 2013, private cabins began appearing along the coast attended by people who can afford them at a cost of between 250 and 400 shekels ($70 -$110) for 12 hours.

Unemployment rate in the Gaza Strip is about 51%, while 80% of the population depends on relief assistance provided by the United Nations Relief and Works Agency for Palestine Refugees (UNRWA) and Arab and international humanitarian agencies.