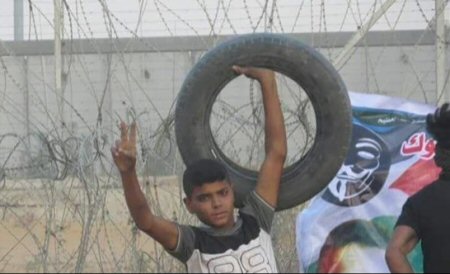 A video has surfaced, documenting the method of how Israeli forces targeted and killed 16-year-old Palestinian, Ahmad Misbah Abu Tyour, while he was participating in “The Great March of Return” protests, in the besieged Gaza Strip.

The video shows the Palestinian teen, while maintaining his distance, throwing rocks towards the border with Israel as a form of protest to the nearly 12-year Israeli siege of Gaza.

The video also shows Ahmad raising his hands up, seconds prior to an Israeli sniper shooting him in the chest and causing him critical injuries.

Ahmad succumbed to his wounds on Saturday morning, according to Ma’an.

The video below is not the first of its kind to document Israel’s intentional killing of Palestinian children, who did not pose any threat to Israel, and yet Israel rarely takes accountability for such shootings.

Israeli authorities announced a decision to open an investigation into the matter.