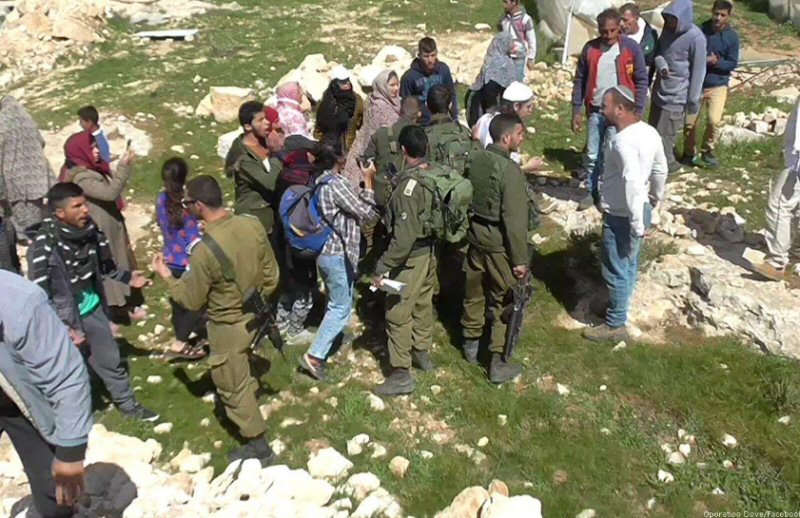 Israeli soldiers are joining colonialist settlers in attacks on a Palestinian village in the occupied West Bank, according to human rights NGO B’Tselem.

The village of ‘Urif, which is located near Nablus, lies in close proximity to the notorious settlement of Yitzhar, established in 1983.

All Israeli settlements are illegal under international law, and described by international human rights groups as part of an inherently discriminatory regime.

According to B’Tselem, the Palestinian residents of ‘Urif “have been suffering for years from repeated attacks by settlers”, with most attacks taking place “in farmland close to the village water tower, which is situated some 500 metres from its easternmost homes”.

In recent months, moreover, the Israeli human rights group “has documented three attacks by settlers in the area, some of which included the active participation of soldiers”.

In March, “settlers assaulted residents of the village”, while the Israeli occupation forces “who accompanied them shot and killed one resident and injured a boy aged 14”. In April, settlers cut down 57 trees on ‘Urif’s land and vandalized vehicles.

In June, “settlers injured a shepherd and assaulted other residents, while soldiers joined in the attack, injuring another resident,” B’Tselem added.

Since then, the NGO continued, there have been four more documented incidents of settlers and soldiers assaulting ‘Urif residents, torching fruit trees and vandalizing cars.

These repeated attacks “are intended to usurp ever-increasing areas of Palestinian land and to annex the land de facto to the settlements”, said B’Tselem, with the result that Palestinians “lose not only their land but also their livelihood.”

In addition, the conduct of Israeli forces, “providing guarding services for the assailants and actively participating in attacks”, part of what B’Tselem describes as a “violent routine”, sends Palestinians “a message of complete disregard for their lives, safety and property.”

B’Tselem added, according to Days of Palestine, that the violence experienced by Palestinians in ‘Urif, and other communities, “is part of an integrated policy which sees the state, through the military and the settlers – engaging in continued efforts, over time, to dispossess as many Palestinians as possible, driving them to leave their land ‘voluntarily’ so that it can be seized.”