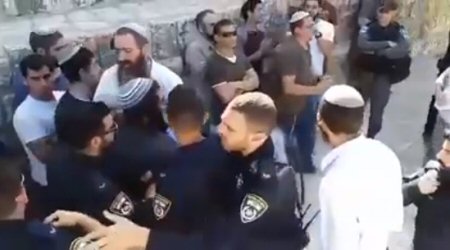 Spokesman for the Islamic Endowment department (Waqf), Firas al-Dibs, said that dozens of Israeli settlers stormed the compound through the Moroccan Gate in successive groups.

Al-Dibs added, according to Ma’an, that many of the Israeli settlers performed religious Jewish prayers on the occasion of the upcoming Jewish holidays.

Israeli settlers have called for increased visits to the compound, to perform rituals, due to Israel’s Yom Kippur also known as the Day of Atonement, one of the most sacred holidays in Judaism, which starts at sunset, on Tuesday, and ends at sunset, on Wednesday.

While Jewish visitation is permitted to the compound, non-Muslim worship at Al-Aqsa is prohibited, according to an agreement signed between Israel and the Jordanian government after Israel’s illegal occupation of East Jerusalem in 1967.

The videos below show large groups of Israeli settlers storming the compound: