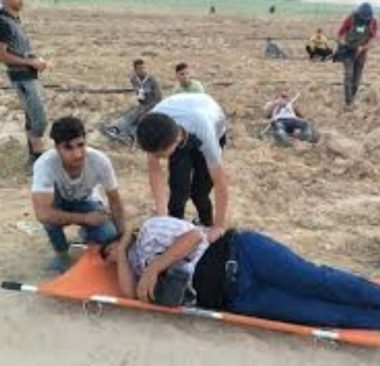 Israeli soldiers shot, on Monday evening, 26 Palestinians with live fire, and caused dozens to suffer the effects of teargas inhalation, after the army resorted to the excessive use of force against a nonviolent flotilla protest against the ongoing deadly Israeli siege on the coastal region.

Media sources in Gaza said dozens of Palestinians gathered at the shore on Gaza city, before boarding boats and trying to sail towards the northern part of the coastal region, as part of the “Freedom Boats for Breaking the Siege” on the Gaza Strip, organized by the Higher National Commission of the Great Return March in Gaza.

Dozens of Palestinians also gathered at the shore of northern Gaza, and in many fishing boats in Palestinian territorial waters, before the Israeli navy attacked them with live fire and gas bombs.

Medical sources said the soldiers shot 26 Palestinians with life fire, and caused dozens to suffer the effects of teargas inhalation.

The wounded Palestinians were rushed to a number of hospitals in Gaza, while the medics provided the needed treatment to those who suffered the effects of teargas inhalation.