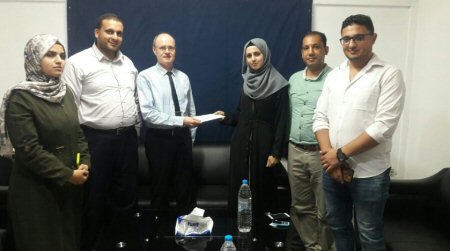 Activists in occupied Palestine, who were disappointed with speeches made by Palestinian Authority President Mahmoud Abbas, at the UN General Assembly, decided to address the international organisation on their own.

In a statement issued by the organisers of the social media campaign, it was pointed out that the action is being launched from the Gaza Strip, which has been under an Israeli-led siege for the past 12 years. They hope to highlight the suffering of the Palestinians in the territory.

“The Israeli occupation has been imposing a tight blockade on the Gaza Strip since 2006 and the Palestinian people living on the Strip have been experiencing dire humanitarian conditions that deteriorated considerably during 2017 and 2018,” explained the statement seen by MEMO. “Now, in the coastal enclave, the unemployment rate has hit 53.7 per cent, the highest rate worldwide. Power cuts are in place for 76 per cent of the time, with just 4-6 hours of electricity per day; 90 per cent of the water is undrinkable and 27 per cent of the Gazans live in abject poverty.”

Tweets have been sent to the UN General Assembly pointing out that 81,500 children suffer from psychological trauma and require specialised support. “What’s more, Gaza’s hospitals suffer a severe shortage of medicine and lack of fuel for emergency power generators. The Israeli occupation denies patients with chronic and serious diseases to have access to treatment outside Gaza.”

Moreover, the activists took the opportunity to remind UN delegates that Israel’s occupation authorities impose restrictions on the entry of construction materials used to rebuild infrastructure and homes destroyed by Israeli attacks on Gaza.

“Given that all the endeavours to lift the 12-year-old Israeli blockade have reached a dead end,” they added, “we were prompted to launch a solidarity campaign on social media, especially on Twitter, using the hashtag #GazaToUN in order to communicate the messages of the beleaguered Gaza Strip to the whole world, in the hope that a positive response will be received from the UN and other international bodies.”

The spokeswoman of the campaign, Rana Shubeir said that, as Palestinians, the people do not seek extra services or a luxurious life. “We want to enjoy our basic human rights, which are guaranteed by international laws and conventions. The Palestinians just need a decent life: milk for our children, water fit for human use, enough electricity, medicine for patients, free movement, construction materials to rebuild our homes — which the international community failed to protect from the Israelis — and, most importantly, dignity and freedom.”

After launching the campaign, the moderator of the Twitter storm, Mohammad Ridwan, was accompanied by a number of other young activists when he handed a message to the Deputy of the Office of the UN Special Coordinator for the Middle East Peace Process in Gaza, Gernot Sauer.

“I will pass this message to the headquarters of the UN and will do my best to pass it to the UN General Assembly,” Sauer told the delegation. “We are working day and night on solving the Gaza crises, including the deteriorating political, economic and social situation.” According to Days of Palestine, the UN official hailed the youths’ campaign to send their messages to the world.