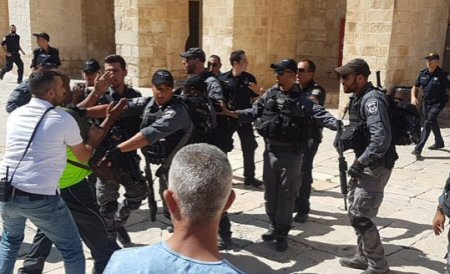 Tensions increased at the Al-Aqsa Mosque, on Thursday, as Israeli forces assaulted a number of Muslim worshipers, while Israeli settlers performed prayers in the compound.

Firas al-Dibs, head of the Public Relations and Media Department at the Islamic Endowment, said that 924 Israeli settlers stormed the Al-Aqsa Mosque compound through the Moroccan Gate, on the fourth day of Sukkot, under armed security of Israeli occupation forces.

Al-Dibs mentioned that, during the entry of the last group of Israeli settlers, an Israeli soldier stopped a Jerusalemite youth, demanding his ID, upon which he was unexpectedly assaulted and detained by Israeli forces.

Eyewitnesses said that, prior to the youth’s detention, Israeli forces beat and pushed him, along with his mother, while several other Muslim worshipers, who were present in the compound, were repeatedly assaulted.

No other detentions were reported, according to Ma’an.

Sources added that Israeli forces and police were deployed throughout the area and closed several the streets leading up to Al-Aqsa Mosque, in order to secure access for Israeli settlers.

While Jewish visitation is permitted to the compound, non-Muslim worship at Al-Aqsa is prohibited according to an agreement signed between Israel and the Jordanian government ,after Israel’s illegal occupation of East Jerusalem, in 1967.