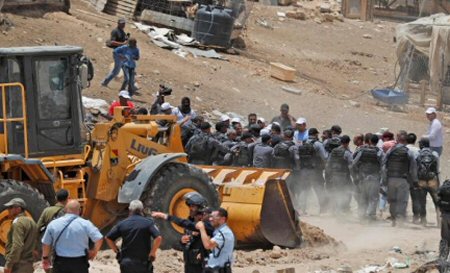 The European Union (EU) has made contact, with the Israeli occupation, to stop the demolition of Khan Al-Ahmar village, east of Jerusalem, an official in the European Commission said.

The official responsible of information and communication in the European Commission, Shadi Othman, said that the EU and its member countries are exerting efforts to prevent Israel from moving forward with the demolition decision.

In his speech to Palestine Radio, Othman warned that the demolition of Khan Al-Ahmar will result in serious implications and consequences for the two-state solution, making it almost impossible.

The village of Khan Al-Ahmar is not an isolated case, according to Al Ray, as there are many similar communities, in Area C of the occupied West Bank, that are threatened with demolition, Othman pointed out, adding that such procedures mean absolute control over the Palestinian territories.

Last Sunday, Israeli occupation authorities gave the residents of Al-Khan Al-Ahmar a week to evacuate the village, according to the coordinator of the “Save the Red Khan” campaign.

Israel’s Supreme Court, on September 15, rejected a petition filed by the families of Khan al-Ahmar, against the demolition of their village, which is inhabited by 190 Palestinians.

The 80 families of Khan al-Ahmar have recently rejected an Israeli offer to be transferred to Jericho city, east of the West Bank, as an alternative home. Khan al-Ahmar is one of 45 villages threatened with demolition in favor of a settlement project called E1. The project is aimed at creating a physical link between Ma’ale Adumim settlement and Jerusalem, and one that would effectively complete a crescent of Israeli settlements around East Jerusalem, dividing it from the rest of the West Bank.