VIDEO: Palestinian Activists in Bethlehem Drum Out US Delegation from Chamber of Commerce and Industry 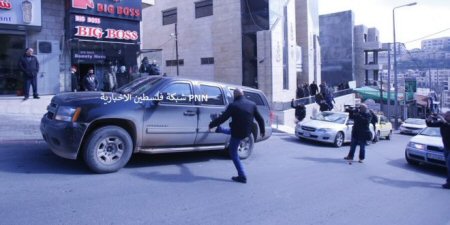 A group of Palestinian activists expelled an American delegation visiting the Bethlehem Chamber of Commerce and Industry, on Tuesday.

The activists carried banners representing the American and Israeli racist administrations, after they entered a hall where a meeting was held with Palestinian businessmen as part of the cooperation between the Chamber of Commerce and the US consulate in Jerusalem.

They expelled the US delegation which was inside the Bethlehem Chamber of Commerce and Industry and closed the office of the Chamber.

The secretary of the Fateh movement in Aida Camp said, according to the PNN, that the Bethlehem Chamber of Commerce and Industry, headed by Mr. Samir Hazboun, received a delegation from the US State Department at the headquarters of the chamber, which is contrary to the national resolution that called for not receiving the Americans, after US president Donald Trump declared Jerusalem to be the capital of Israel. He also said: “Any American who doesn’t stand with the Palestinian people is not welcome here.”

Activist Ahmed Odeh said that today’s action was a message to the arrogant US administration, which sided with the criminal occupation, recognized Jerusalem as the capital of Israel, cut aid to UNRWA, and violated Palestinian rights.

Activists demanded the dismissal of the chairman of the Bethlehem Chamber of Commerce and Industry, Mr. Samir Hazboun, as he withdrew from the national consensus, and did not respect all Palestinian national decisions by holding this meeting.

Popular Resistance activist Ibrahim Musallam said that the move was based on a national decision against US policy in the region and a political stance to boycott the unwelcome Americans until the US reconsider their decisions on Jerusalem.

Mazen Al-Azza, leader of the Palestinian National Initiative and one of the Popular Resistance activists, said that the title of this event was“Palestine is Not for Sale”.

The U.S. Department of State said that the “Palestinians interrupted a program organized by the General Consulate in Jerusalem,” and claimed that the meeting was part of “ongoing American efforts to create a better economy.”

It stated that there have been no injuries in the incident, but described it as an “intimidation,” and claimed that “the United States strongly rejects all sorts of violence in expressing opinions.”