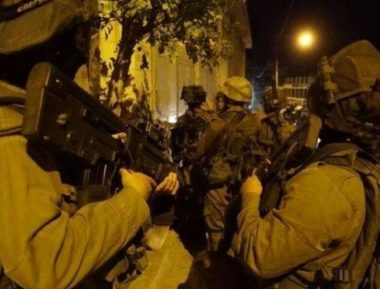 Israeli soldiers abducted, on Tuesday at dawn, fifty-four Palestinians from several parts of the occupied West Bank, including 33 in Jerusalem, after invading their homes and violently searching them, the Palestinian Prisoners’ Society (PPS) has reported.

In occupied Jerusalem, the soldiers abducted 33 Palestinians, including several children, during extensive and violent searches of homes in al-‘Isawiya town.

It added that the soldiers abducted Ahmad Qassem Sheikh, 54, from Marah Rabah village, south of Bethlehem.

In addition, the soldiers invaded Doha town, west of Bethlehem, and violently searched the home of a lawyer and the head the Independent Commission for Human Rights in southern West Bank, Farid al-Atrash.

The army also invaded and searched a print shop in the Salam neighborhood, in Deheishe refugee camp.

It is worth mentioning that Lufti has a physical disability after the soldiers previously shot him.

Furthermore, the soldiers invaded many homes in Bani Neim, Sa’ir, Doura, Beit ‘Awwa, and ath-Thaheriyya towns, in the southern West Bank governorate of Heron, in addition to Jouret Bahlas, north of Hebron city, and installed many roadblocks, before stopping dozens of cars and interrogated the passengers.