As Long as Occupation Exists, Soldiers Will Continue to Speak Out 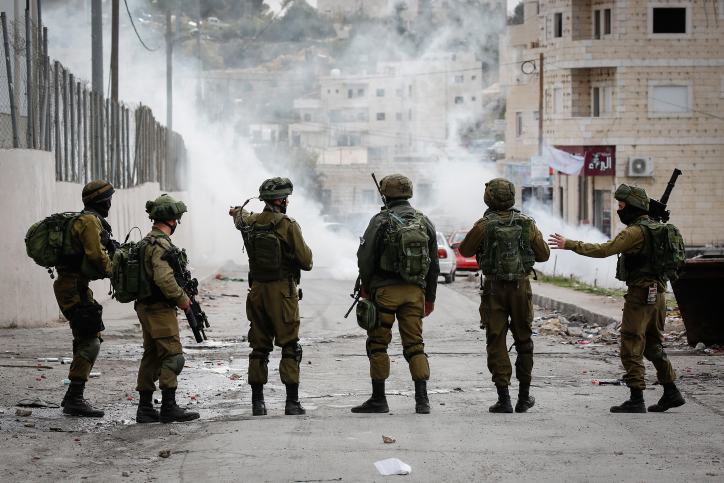 We must make our voices heard sharply and clearly, so that every person who served in the occupied territories will know that speaking out is not merely an option — it is a moral duty.

Like many who served alongside me, I preferred to remain silent. I preferred to forget, not to speak about the Palestinian homes I broke into in the middle of the night, forgetting the violence I carried out at checkpoints and the passivity required of me when settlers freely broke the law. When I was released from the army, I preferred to repress those three years, to put them behind me.

Only after I joined a Breaking the Silence tour to the South Hebron Hills did my eyes open. Only then, I chose to speak. That is how I learned that I wasn’t alone. I learned there are others like me — soldiers who see the situation the same way and choose to take responsibility and change the way they and their society, our society, talk about the occupation.

This is what occupation sounds like: “Make sure the village doesn’t sleep.” “A man is tied up and kicked in the the stomach and the head.” “A death sentence for an unarmed man.” “Every kid you see with a stone — shoot to kill.” “You can do whatever you want, no one is going to ask anything.” “In practice you simply abuse the population.” All of these are random titles of Breaking the Silence’s testimonies. Little moments in a years-long occupation.

Then there are those who prefer to silence others.

The past two years have seen constant attempts by the Israeli government to silence anyone who opposes the occupation, sending a clear message: “You are not to discuss what goes on there.” Whoever dares speak up is branded and blacklisted, while the government’s delegitimization campaign is getting more and more outrageous. But I’m not willing to stay silent. Together with the 1,100 soldiers — men and women who have broken their silence — we insist that our voice be heard. We must make our voices heard sharply and clearly, so that every person who served in the occupied territories will know that speaking out is not merely an option — it is a moral duty.

This past week, Breaking the Silence released its new booklet of testimonies, titled “Why I Broke the Silence,” in which soldiers chose to speak about the reasons for coming clean about the goings on in our backyard. There are many reasons for doing so, and the truth is that the organization could have published the booklet at any given moment over the past years. But now, when many are trying to silence and incite against us, it was important to remind the Israeli public why soldiers continue to break their silence. After all, the central reason for breaking the silence is the occupation. As long as there is an occupation, there will be those who choose to expose what the government is trying so hard to hide.

This is what an occupier sounds like: “Back then, I wasn’t aware that there are roads for Jews only, what they called a ‘sterile route.’” “I’m ashamed of what I did there.” “I’m just a pawn in the system.” “We’re getting into the population’s arteries,” “They told us: ‘dry them out,” “The political leadership is close to the settlement enterprise.”

The following testimony was given to Breaking the Silence by a soldier who served in the Haruv Battalion in 2009, though it could have been given in 2002 or 2017 — or on any given Friday night, when most of us are sitting down for dinner, surrounded by family and friends. Haruv Battalion, near the West Bank city of Salfit, not far from Ariel, 2009. Israeli forces arrive in the village of Hares after Palestinians threw stones in the area:

What shook me up the most was the searches we did in Hares, that was the straw that broke the camel’s back. They said there are 60 houses that have to be searched. I said that there had to have been some warning from intelligence. I tried to justify it to myself. We entered at night, the whole division. It was a battalion operation, they spread out over the whole village, took control of the school, smashed the locks, the classrooms. One room was used as the investigation room for the Shin Bet, one room for detainees, one room for the soldiers to rest. I remember it particularly annoyed me that they chose a school.

We went house by house, knocking at two in the morning on the family’s door. They’re scared to death, girls peeing in their pants with fear. We bang on the doors, there’s a feeling of ‘We’ll show them,’ it’s fanatical. We go into the house and turn everything upside down. Gather the family in one room, put a guard there, tell the guard to keep his gun on them, and then search the whole house. We received another order that everyone between 16 and 29, doesn’t matter who, bring him in cuffed and blindfolded. […] What shocked me the most was that there was also looting. One person took 20 shekels. People went into the houses and looked for things to steal. This was a very poor village. At one point, guys were saying, ‘What a bummer, there’s nothing to steal.’ ‘I took some markers just so I could say that I stole something.’ You see people who are really poor. Among the soldiers, after the action, there was a lot of joy at people’s misery, guys were happy talking about it.

There was a moment where someone whom they knew was mentally ill yelled at the soldiers, but one soldier decided that he was going to beat him up anyway, so they hit him. They hit him in the head with the butt of a gun, he was bleeding, and they brought him to the school along with everyone else. There were a pile of arrest orders signed by the battalion commander, ready, with one area left blank. They’d fill in that the person was detained on suspicion of disturbing the peace. They just filled in the name and the reason for arrest. I remember there were people with plastic handcuffs that had been put on really tight, and I’d cut them off and put on looser ones. I got to speak with people there (Palestinians). There was one who worked 13 hours a day, and another one whom a settler had brought into Israel to work for him. After two months he didn’t pay him and handed him over to the police.

Another thing that bothered me was that there was one house that they just demolished. […] The mother watched from the side and cried, the kids sat with her and stroked her. I see how my mom puts so much effort into every corner of our house, and suddenly they come and destroy it.

What does it mean, to destroy a house? They smash the floors, turn over sofas, throw plants and pictures, turn over beds, smash the closets, the tiles. There were other, smaller things, but this really bothered me. The look on the people whose house you’ve gone into. It really hurt me to see this. And after all that, they left them for hours tied up and blindfolded in the school. The order came to free them at four in the afternoon. So that was more than twelve hours. There were investigators from the security services who sat there and interrogated them one by one. We didn’t even find any weapons. The brigade commander claimed that the Shin Bet did find some intelligence, and that there are a lot of guys there who throw stones, and that now we’d be able to catch them…

Things from the operation in Hares are always surfacing in my mind. The way they looked at us, what was going through their minds, their children’s minds. How you can take a woman’s son in the middle of the night and put him in handcuffs and a blindfold.

This past year, in which we marked 50 years of Israeli rule over the occupied territories, was challenging for opponents of the occupation. In the face of scaremongering and silencing, brave citizens stood up and decided that they would not back down, choosing to raise their voice against the occupation. I am proud to be part of a movement that stands behind its principles, and will not stop until we cease ruling over another people.

From a speech delivered by Breaking the Silence Executive Director Avner Gvaryahu at the launch of the new booklet, Why I Broke the Silence. This article was first published in Hebrew on Local Call.

Reposted from Breaking the Silence.