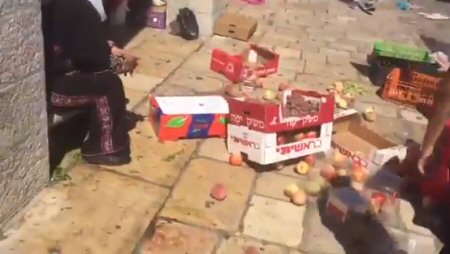 Israeli municipality staff have assaulted Palestinian farmers and vendors in the streets of occupied East Jerusalem on Monday, a day before the Muslim holiday of Eid al-Adha.

Locals said, according to Ma’an, that Israeli municipality staff, under armed security by Israeli forces, targeted Palestinian farmers in the streets of the Old City of Jerusalem and in the Salah al-Din Street of the city.

Sources confirmed that Israeli municipality authorities stormed the areas, issuing tickets to the farmers and vendors forcefully removing them.

Meanwhile, Israeli forces assaulted an elderly Palestinian woman with several other farmers, and destroyed their crops, including grapes, apples and peaches.

It is noteworthy, that farmers in Jerusalem are subjected to such assaults on a daily basis, preventing them from selling their crops in the street. In addition, the proceeds of selling these crops support dozens of needy or less fortunate Palestinian families in various neighborhoods.

The assault on farmers and vendors in occupied East Jerusalem coincides with preparations for the Muslim holiday of Eid al-Adha.