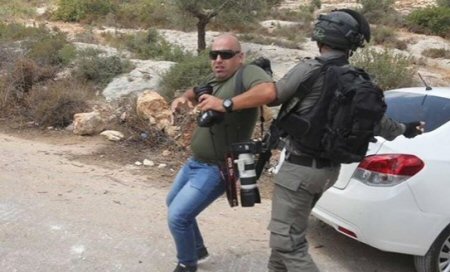 Five Palestinians were injured and three others were detained by Israeli forces on Tuesday, in the village of Ras Karkar in the central occupied West Bank district of Ramallah.

Sources added that Israeli forces detained three Palestinians and assaulted several residents of the village, as well as members of the Wall and Settlement Resistance Committee.

Five Palestinians suffered injuries due to being assaulted by Israeli forces.

A WAFA photojournalist, identified as Bahaa Nasr, was among the detainees.

One of the landowners confronted an Israeli soldier during the raze, stressing: “Where is the law? This is not law. This is law for you, but not for me. This is my land.”

Soldiers forcefully evacuated residents of the area until Israeli bulldozers completed razing the land, which resulted in violent confrontations between the residents and Israeli forces.

Israeli forces chased the residents of the village and fired tear-gas and sounds bombs at them.

Israeli NGO B’Tselem reported that “Israeli settler violence and vandalism takes place with full backing by the Israeli authorities. Sometimes soldiers take part in the assault; at other times, they stand idly by. The police makes no substantial effort to investigate the incidents, nor takes measures to prevent them or stop them in real time.”