Video: Soldiers Laugh and Cheer While Shooting at Palestinian Civilians 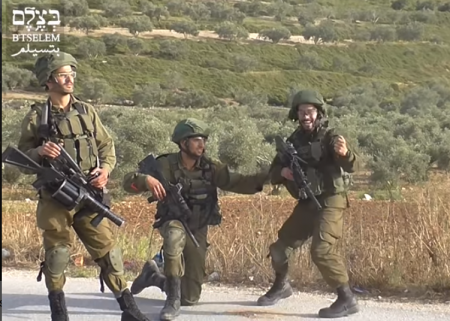 A new video released by the Israeli human rights group B’Tselem shows a group of Israeli soldiers laughing and cheering as they shoot at Palestinian villagers from Madama, in the northern part of the West Bank, as they try to remove a barrier placed by the Israeli military in the road. The barrier was blocking the villagers from accessing their homes.

According to the report by B’Tselem, at around 2:00 P.M. on Friday afternoon, 13 April 2018, some thirty residents of the Palestinian village of Madama tried to remove a roadblock the Israeli military had placed at the eastern entrance to the village.

About eleven soldiers then arrived on the scene. In the clashes that ensued, residents threw stones at the soldiers from a distance of 50-80 meters, and the soldiers fired stun grenades and rubber-coated metal bullets at the villagers.

Seven residents sustained injuries from the rubber-coated metal bullets the soldiers fired: two were taken to a hospital in Nablus for medical treatment, and the other five were treated on the spot.

“One live bullet, and this whole thing will be over”, the soldiers are heard joking, and one soldier directs the other to “shoot the kid with the white shirt – he’s brave, wait til he comes closer – let’s teach him a lesson.”

In posting the video, B’Tselem noted, “Joyfully cheering about shooting a person trying to clear the access road to his home and calmly discussing other ways to hit him and the other people with him are part of the discordant soundtrack accompanying 51 years of occupation.”

The video was filmed by B’Tselem volunteers Mu’awiyah Nassar and Ahmad Ziyadah.