Israeli Soldiers Abduct Two Palestinians In Jerusalem, And One In Bethlehem 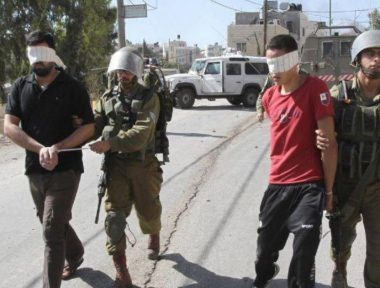 Israeli soldiers abducted, on Wednesday at dawn, two young Palestinian men from their homes in the al-‘Isawiya town, in occupied Jerusalem, and one Palestinian in Bethlehem.

The soldiers abducted Ahmad Yousef Obeid and Waseem Dari, after invading their homes and searching them in al-‘Isawiya, and moved them to an interrogation facility.

The soldiers also invaded and ransacked many homes in the town and interrogated several Palestinians while inspecting their ID cards.

In addition, several army vehicles invaded the Saff Street area, in Bethlehem city, and abducted a young man, identified as Mahmoud Hammad, after breaking into his home and searching it.

In related news, the soldiers invaded Khallet ad-Darba area, in ‘Azzoun town, east of the northern West Bank city of Qalqilia, to abduct a young man, identified as Amro Abu Haniyya, but failed to find him for the fourth consecutive time.

The soldiers also invaded Halhoul town, north of the southern West Bank city of Hebron, and drove around several neighborhoods.

It is worth mentioning that the Israeli army said its soldiers arrested eight Palestinians in several parts of the West Bank, and confiscated around 240.000 shekels from homes of what it called “Hamas affiliates” in Beit Fajjar and Bethlehem city.