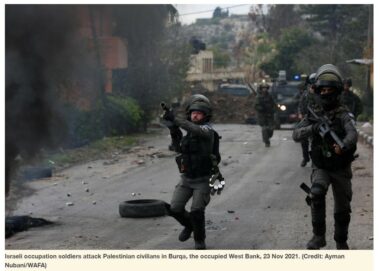 NABLUS, Thursday, December 23, 2021 (WAFA) – Some 125 Palestinian civilians sustained light to moderate injuries today during clashes with the Israeli occupation forces, which erupted shortly after hundreds of Israeli settlers protected by the army attempted to break into and attack the village, according to medical sources.

The Palestinian Red Crescent (PRC) told WAFA that 42 Palestinians, including a journalist, were injured after being hit with rubber-coated steel rounds, while another eighty-three sustained suffocations from inhalation of teargas fired by the Israeli army.

PRC added that a girl was treated for shock after a group of violent Israeli settlers attacked her family’s home on the outskirts of the village.

Entrances to the village have been shut down with earth mounds by the Israeli occupation forces since yesterday to allow access of thousands of Israeli settlers to the nearby site of Homesh, a pre-2005 Israeli settlement that ultra-Orthodox settler groups are urging the Israeli government to allow them to return there.

Dozens of busloads of Israeli settlers were seen today at Route 60, which is adjacent to the village, as settlers rampaged through the main Jenin-Nablus Street and blocked access to Palestinian vehicles and attacked others.