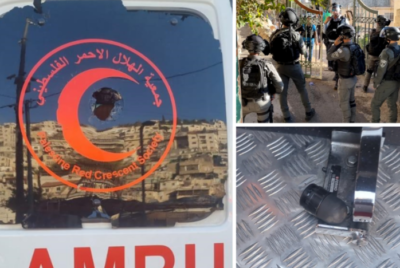 JERUSALEM, Friday, June 4, 2021 (WAFA) – At least 19 Palestinians were injured today as Israeli occupation forces attacked and dispersed a marathon which was organized by Palestinian protesters outside the neighbourhood of Sheikh Jarrah in occupied Jerusalem.

The marathon was held to raise the voice of the dozens of Palestinian families facing an Israeli threat of eviction from their homes in Batn al-Hawa quarter, in the neighbourhood of Silwan, and in the Sheikh Jarrah neighbourhood.

The Palestinian Red Crescent (PRC) said its medics provided medical treatment to 19 Palestinians who were wounded from stun grenades and due to beating by the Israeli police. One of the wounded was evacuated to a hospital.

WAFA correspondent said Israeli police fired teargas canisters and stun grenades at the competitors participating in the marathon, which set off from the entrance of Sheikh Jarrah neighbourhood and passed through the Lions Gate and the Batn al-Hawa Quarter in the neighbourhood of Silwan. The marathon was dispersed as a result.

Police officers also assaulted reporters and cameramen working for the Palestine TV and smashed one of their cameras.

All of the competitors who were dispersed are citizens of occupied Jerusalem and the Palestinian territories occupied since 1948.

Asaad Dari, 24, one of the participants of the marathon, told WAFA that this initiative aims to raise the voice and highlight the dangers of displacement and eviction facing many Palestinian families in the occupied capital.

He added that this marathon is part of the solidarity activities with the families threatened with eviction from their homes in Sheikh Jarrah and Silwan.

At least 28 families in Sheikh Jarrah and 86 families in Batn al-Hawa are facing an Israeli threat of eviction from their homes in favour of colonial settler groups.

The potential evictions have gained international attention amid calls by many of the world leaders upon the Israeli occupation authorities not to proceed with the arbitrary evictions.