Palestinian Mother Dies From Wounds She Suffered In Gaza 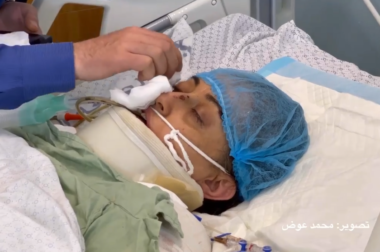 Palestinian medical sources in the Gaza Strip said a mother has died from serious wounds she suffered when the Israeli army fired missiles, on May 16th, into homes in Gaza city, killing 37 Palestinians, including her two daughters,

The sources said the woman, Diana Ziad Abu al-Ouf al-Yaziji, suffered serious wounds, before she was moved to a hospital in Gaza then was transferred to Jerusalem, but succumbed to her injuries on June 3rd. She was injured when the army fired many missiles and shells into homes and residential buildings in the al-Wehda Street, in the center of Gaza city, killing 37 Palestinians, including her daughters Rawan and Shaymaa.

It is worth mentioning that Shaymaa was studying to become a dentist and was engaged to be married after the al-Fitr Muslim feast.

On the same day of her death, a young Palestinian man, identified as Yahia Bassem al-Ejla, 24, also succumbed to serious wounds he suffered during the Israeli offensive.

Yahia and his cousin, Majd, were seriously injured when the army fired missiles into stores in the ash-Sheja’eyya neighborhood in Gaza city; Majd remains in a critical condition.

The Palestinian Health Ministry in Gaza said their deaths bring the number of Palestinians who were killed during the eleven-day Israeli offensive on Gaza this past May to 260, including 66 children, 40 women, and 17 elderly.