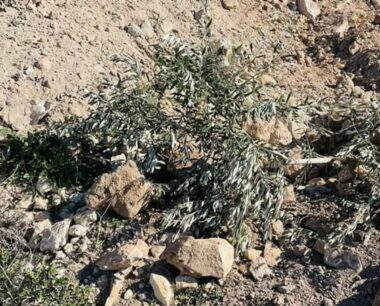 QALQILIA, Sunday, January 22, 2023 (WAFA) – Extremist Israeli settlers today uprooted and chopped off nearly 350 olive trees belonging to a Palestinian farmer in the village of Jit, to the east of Qalqilia in the occupied West Bank, according to local sources.

Ahmad Faruq Sedda, a local Palestinian resident, told WAFA that a group of Israeli settlers from the colonial Israeli settlement of Kedumim, nearby, sneaked into his brother’s land near the village and chopped off 350 olive trees belonging to the latter, some of which are more than 13 years old.

Violence and acts of vandalism by Israeli settlers against Palestinians and their property are routine in the West Bank and are rarely prosecuted by Israeli occupation authorities.

Over 650,000 Israeli settlers live in colonial settlements in the West Bank and East Jerusalem, violating international law and consensus.