WAFA: Father Of Cancer-Stricken Child Among 23 Detained By Israel Across West Bank 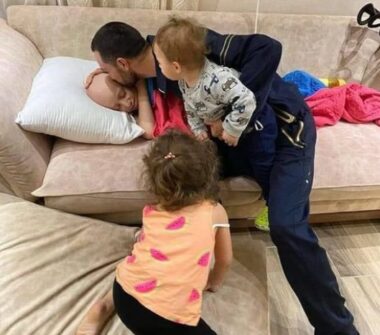 Tuesday, September 14, 2021 (WAFA) – Israeli forces today detained at least 23 Palestinians, including a father of a cancer-stricken child, from various parts of the occupied territories, according to Palestinian security sources.

They said that Israeli forces rounded up nine Palestinians from the southern West Bank district of Hebron.

One of the nine detainees was identified as 37-year-old father-of-four, Hijazi Qawasmeh, whose eldest son, Ahmad, 11, suffers from cancer.

An image went viral on social media showing Hijazi bidding farewell to his cancer-stricken son as heavily-armed Israeli soldiers raided his house in the middle of the night in Hebron and took him away to prison.

The soldiers also broke into and ransacked Hijazi’s store in al-Eizariya town, east of Jerusalem.

Six others out of the nine detainees were identified as residents of Dura and Deir Samet towns as well as Kureisa, Beit al-Rush al-Fauqa and Deir al-Asal al-Fauqa, west and southwest of Hebron. They included a father and his son.

The two others of the nine detainees included a 36-year-old former prisoner Sair town, northeast of Hebron.

In Bethlehem district, the sources confirmed an Israeli military raid in Harmala village, east of Bethlehem city, resulting in the detention of one person.

In Jerusalem, Israeli police brutally assaulted and rounded up two others from the vicinity of Bab Hutta, which leads to Al-Aqsa Mosque compound.

The soldiers stole a large amount of money from the house of one of the detainees.

In a similar raid in Kafr Ein village, northwest of Ramallah, soldiers detained one person.

Also in Ramallah district, soldiers last night raided Nilin village, west of Ramallah city, where they detained two youngsters aged 14 and 16 from their plot of land.

In Salfit district, a military force stormed Kifl Haris town, north of Salfit city, where they rounded up three before releasing them several hours afterward.

One of the detainees was identified as a lawyer, who was beaten and subsequently rushed to a hospital.

Meanwhile, another Palestinian was detained while inside Israel. He was identified as a resident of al-Jalamaa town, north of Jenin city.

This came as Israeli forces carried out a large-scale search campaign, breaking into the houses and interrogating the residents of Yabad town and al-Jalama village, west and north of the city, as part of the ongoing massive manhunt for two prison escapees who remain at large.

Also in the same district, Israeli soldiers last night detained another Palestinian from the vicinity of Salem checkpoint, west of the city.