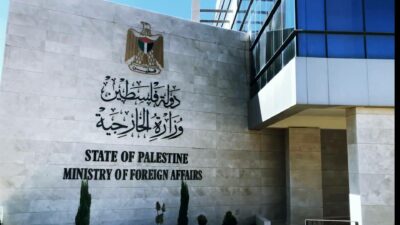 RAMALLAH, Tuesday, October 18, 2022 (WAFA) – The Ministry of Foreign Affairs and Expatriates today welcomed the Australian government’s decision to reverse the decision taken by the previous government recognizing West Jerusalem as the capital of Israel.

In a statement issued today, the ministry considered “this decision a positive correction to Australia’s position that falls in line with international law and United Nations resolutions.”

It also appreciated Australia’s call for implementing and adhering to the two-state solution and considering Jerusalem the basis of the negotiated final-status issues in accordance with international legitimacy.

It stressed that this Australian decision supports international and regional efforts aimed at reviving the peace process and negotiations between the Palestinian and Israeli sides, and Australia’s keenness to achieve security and stability in the conflict and the region by restoring the political horizon for resolving the conflict.

The Foreign Ministry called on all countries that made wrong decisions regarding Jerusalem to follow Australia’s example and reverse its previous decisions.

At the same time, it said that it is waiting for the Australian government to move towards a more important step, which is recognizing the State of Palestine, embodying its commitment to the principle of the two-state solution, and its commitment to the decisions of the ruling Labor Party, which officially adopted the recognition of the State of Palestine, demanding that the government implement that recognition.

It also strongly condemned the Israeli reactions to Australia’s decision, considering them unjustified and an official Israeli rebellion and a coup against the signed agreements and relevant United Nations resolutions, as well as reflecting the fact that there is no Israeli peace partner.

Australia announced today the revocation of its recognition of West Jerusalem as the capital of Israel, reversing the decision taken by the previous conservative government.

Foreign Minister Benny Wong confirmed the decision, stressing that “Jerusalem is a final status issue that should be resolved as part of any peace negotiations between Israel and the Palestinian people.”

She said that Australia is committed to a two-state solution in which the future Palestinian state and Israel coexist in peace and security, within internationally recognized borders, adding that Australia would not support an approach that would undermine this.

“Australia’s Embassy has always been, and remains, in Tel Aviv,” said the Foreign Minister.

The decision to recognize West Jerusalem as the capital of Israel was made by former Australian Prime Minister, Scott Morrison, in 2018.