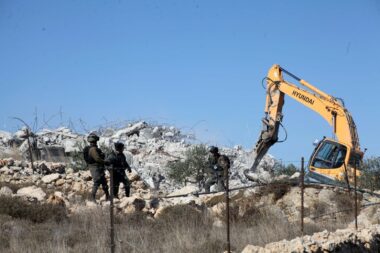 Police then escorted a bulldozer to the area, where the heavy machinery tore down a one-storey house belonging to Mohammad Matar, purportedly for being built without a license.

Matar had self-demolished parts of his house in last August under the same pretext.

Police also barged their way into al-Bustan neighborhood in Silwan, where they handed three Palestinians orders to demolish their houses, which were built before Israel occupied the West Bank in June 1967.

Abu Diyab cautioned against the occupation authorities’ attempts to tear down several neighborhoods in Silwan, located south of Al-Aqsa Mosque compound, as a means to impose full control on Jerusalem.

While the Israeli occupation municipality refuses to allow Palestinians to build or restore their buildings in Silwan, settlers often are able to re-construct the buildings they take over and expand them with consent from the Israeli municipality of West Jerusalem.

Currently hundreds of Palestinian-owned houses in different areas of Silwan, but mainly in Batn al-Hawa, Wadi Hilweh, and al-Bustan areas, are under threat of demolition by the Israeli municipality for construction without permit.

However, Palestinians believe the demolition orders are part of a large-scale Israeli ethnic cleansing scheme intended to empty Silwan of its Palestinian residents to eventually inhabit it with Israeli settlers and turn it into what it calls the City of David.