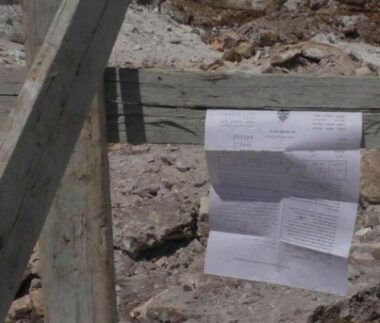 QALQILIYA, Wednesday, January 11, 2023 (WAFA) – The Israeli occupation authorities today ordered a halt on the construction of three Palestinian structures in Jayus village, east of the northern West Bank city of Qalqilia, according to local sources.

They said that the soldiers handed three villagers notices, ordering them to stop the construction of their agricultural structures.

Israel demolishes Palestinian houses and structures almost on a daily basis as a means to achieve “demographic control” of the occupied territories.

In contrast, Israel argues that building within existing colonial settlements is necessary to accommodate the “natural growth” of settlers. Therefore, it much more easily gives the over 800,000 Jewish Israeli settlers there building permits and provides them with roads, electricity, water and sewage systems that remain inaccessible to many neighboring Palestinians.

Soldiers in the oxymoronically named Civil Administration, the name Israel gives to the body administering its military occupation of the West Bank, determine where Palestinians may live, where and when they may travel (including to other parts of the occupied territories like Gaza and East Jerusalem), whether they can build or expand homes on their own land, whether they own that land at all, whether an Israeli settler can takeover that land among others.