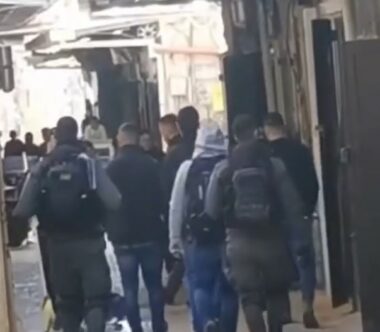 On Wednesday, Israeli soldiers abducted two siblings and summoned their brother for interrogation, in Jericho city, in the northeastern Bank, and abducted a young man and a child in the occupied capital, Jerusalem.

Eid Barahma, the head of the Jericho office of the Palestinian Prisoners’ Society (PPS), said the soldiers abducted Ziad and Hasan Abdul-Qader Oweidat after invading their family’s home and ransacking it.

Barahma added that the soldiers recently invaded and ransacked the home several times, looking for their brother Majdi.

In occupied Jerusalem, the soldiers abducted a young man at Bab Hutta near the Al-Aqsa Mosque and took him to an interrogation facility.

The soldiers also abducted a child, Ali Bakr Mustafa, 15, near the Council Gate leading to the Al-Aqsa Mosque.

The child, from Al-Isawiya town in Jerusalem, was taken to a nearby police center.

On Wednesday dawn, Israeli soldiers invaded and violently searched dozens of homes across the occupied West Bank and abducted twenty-one Palestinians, including siblings.