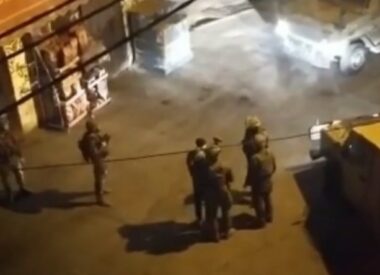 On Wednesday dawn, Israeli soldiers invaded and violently searched dozens of homes across the occupied West Bank and abducted twenty-one Palestinians, including siblings.

The soldiers also abducted Mohammad Fawzi Sajdi, 48, from Al-Khader town, south of Bethlehem, and Riyad Emad Al-Badan, 22, from Tuqu’ town, east of the city, after storming their homes and ransacking them.

In Ramallah, in the central West Bank, the soldiers invaded Ni’lin town, west of the city, and abducted two teenage boys, Mohammad Bilal Al-Khawaja and Mohammad Shokri Al-Khawaja, from their families homes.

In Jenin, in the northern West Bank, the soldiers invaded Fahma village, south of the city, before the soldiers stormed and ransacked homes and abducted Hasan Yousef Mara’ba, 42.

The soldiers also invaded the home of Mohammad Jarir Sa’abna, detained and interrogated him for two hours before releasing him.

Furthermore, the army invaded many areas around several villages and towns in Jenin and closed intersections.

In Hebron, in the southern part of the West Bank, the soldiers invaded and violently searched dozens of homes in the city and several other parts of the governorate and abducted ten Palestinians, including four siblings.

Furthermore, the army installed many military roadblocks on Hebron’s northern streets and the entrances of Sa’ir, Doura, and Halhoul towns, near Hebron, stopped and searched dozens of cars, and interrogated many Palestinians while inspecting their ID cards.