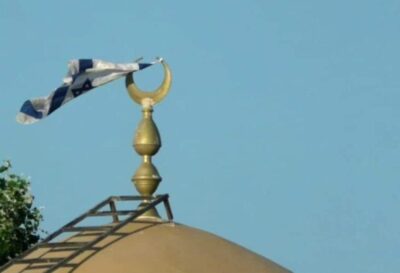 Ahmad Ghazal said that a group of colonizers sneaked their way into the southern West Bank village, vandalized the main entrance of a local mosque, and attempted to break inside, but could not do so.

The vandals, Ghazal added, ascended to the mosque roof, and hoisted a flag of Israel.

Israel has established three colonial settlements, namely Ma‘ale Amos and Mizpe Shalem besides to the settlement outpost of Ibei Hanahal on lands confiscated from the village. It has confiscated further land for the construction of settler-only by-pass road no. 901 and road no. 3698, which extends for 16.1 kilometers on the village land.

Israel has constructed a section of the apartheid wall, confiscating, and isolating some 87,344 dunams of fertile land, accounting for 65.5 percent of the village total area, for colonial settlement activities and pushing the villagers into a crowded enclave, a ghetto, surrounded by walls, colonies, and military installations.