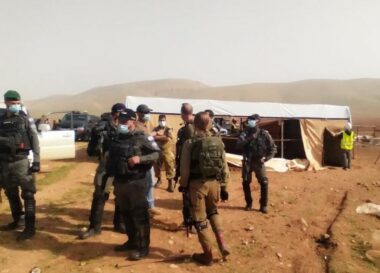 Mu‘taz Besharat, a Palestinian official who monitors Israeli colonial settlement activities in Tubas governorate, said that Israeli forces escorted bulldozers into the village, where the heavy types of machinery have been tearing down residential structures and livestock sheds and sabotaging water tanks and solar panels since 6:00 AM this morning.

Under international law, driving residents of an occupied territory from their homes is considered a forcible transfer of protected persons, which constitutes a war crime. But residents of Palestinian communities in the Jordan Valley are no strangers to such disruptive Israeli policies.

Approximately 6,200 Palestinians live in thirty-eight communities in places earmarked for military use and have had to obtain permission from the Israeli authorities to enter and live in their communities.