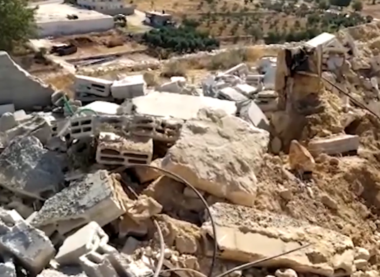 The Bani Na‘im Municipality told WAFA that the Israeli forces escorted heavy machinery to the Khallet al-Warda area, adjacent to the settler-only by-pass Road 60, and tore down a 200-meter long and six-meter-high retaining wall, belonging to Nader Jaber.

Hebron district has seen a spike in Israeli forces and settler attacks since the beginning of 2021, including home and tent demolitions, land and crop razing, and assaults against shepherds, as a means to force Palestinians out of their lands and make room for Israeli colonial settlement construction.

Located eight kilometers east of Hebron, Bani Na’im occupies a total area of 157,000 dunums, including 71,000 Dunams of arable land, some 20,000 Dunams of cultivated land, and some 83,000 Dunams of open spaces and rangeland.

Although most of the town’s 27,000 population have moved into newer housing in the outskirts, the ruins of the old town, dating back to the 1600s, still remain. The preserved houses are built in traditional Palestinian style, made of local limestone with arched roofs.  The town was known as Brekke in Roman times, and later renamed after the Bani Ne‘im tribe that settled there in the 17th century.

Twenty percent of the population are engaged in the agricultural sector, planting olive trees, grapevines, fig trees, vegetables, such as tomatoes, snake cucumber, and cabbage, in addition to barley.

The Israeli occupation authorities have confiscated over a thousand Dunams and built colonial settlements, namely Pene Hever at the expense of the town’s land. They have also subjected the town residents to movement restrictions through the installation of a permanent checkpoint and an iron gate.