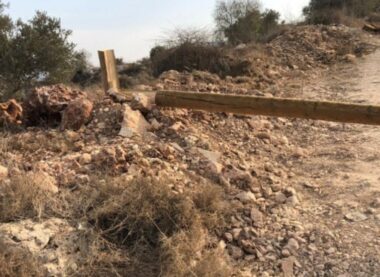 A group of fanatic Israeli colonialist settlers, illegally squatting on Palestinian lands, cut and destroyed a main power line, on Saturday night after midnight, in the western part of Jaloud village, south of the northern West Bank city of Nablus.

Media sources said the colonists used hand saws in cutting the wooden pole of a main powerline, disrupting the grid lines and causing damage after chopping it.

They added that the colonists are trying to cut the powerlines providing electricity to the Palestinians in Khirbet Sarah village, isolated between the illegal Shilu and Shvut Rachel colonies, which were installed on stolen Palestinian lands.

It is worth mentioning that, a month ago, the colonists destroyed the electricity network in the eastern area of Jaloud.

These attacks are part of an extensive series of violations that target homes, and other property, in addition to burning farmlands, in an attempt to force the Palestinians to leave.

Israel’s colonies in the occupied West Bank, including in and around occupied Jerusalem, are illegal under International Law, various United Nations and Security Council resolutions, in addition to the Fourth Geneva Convention to which Israel is a signatory and a constant violator. They also constitute war crimes under International Humanitarian Law.