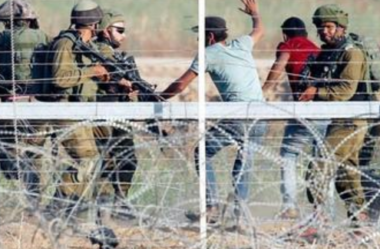 Israeli soldiers abducted, on Saturday evening, three young Palestinian men after they reportedly breached the perimeter fence, in the southern part of the besieged and impoverished Gaza Strip.

The Israeli army stated that the soldiers detained the three Palestinians and claimed that the youths were carrying knives.

It added that the three Palestinians were moved to an interrogation facility run by the Internal Security Service.

It is worth mentioning that the Israeli army frequently invades and uproots Palestinian lands near the perimeter fence across the eastern parts of the coastal region.

The attacks are part of ongoing Israeli violations against the Palestinians, especially the fishermen, farmers, shepherds, and workers in the besieged and impoverished Gaza Strip, and have led to dozens of casualties, including fatalities, in addition to serious property damage and the confiscation of many boats after abducting the fishermen.