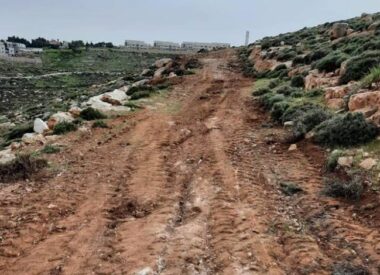 BETHLEHEM, Wednesday, March 24, 2021 (WAFA) – Israeli bulldozers today razed a plot of Palestinian land in the village of Kisan, east of the occupied West Bank city of Bethlehem, according to a local official.

He noted the plot of land was already seized by the Israeli authorities years ago, as he warned of ongoing settler violations against the village.

Israel has established three colonial settlements, namely Ma‘ale Amos and Mizpe Shalem besides to the settlement outpost of Ibei Hanahal on lands confiscated from the village. It has confiscated further land for the construction of settler-only by-pass road no. 901 and road no. 3698, which extend for 16.1 kilometers on the village land.

Israel has constructed a section of the apartheid wall, confiscating and isolating some 87,344 dunams of fertile land, accounting for 65.5 percent of the village total area, for colonial settlement activities and pushing the villagers into a crowded enclave, a ghetto, surrounded by walls, settlements, and military installations.