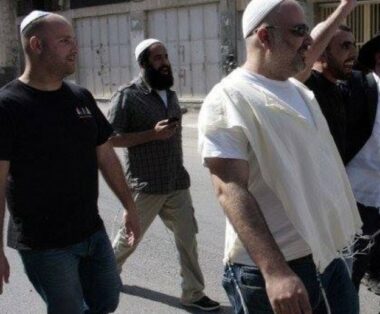 They said that the settlers spewed pepper spray in the faces of the brothers as they were standing in front of their family house on al-Sahla Street in the Tal Rumeida neighborhood, causing painful burning of the skin.

The neighborhood has been a target of frequent settler attacks, including forcible entry into houses, shouting profanities and racist slogans at Palestinian residents and threatening to kill them and seize their property.

In February, settlers from the same notorious colonial settlement attempted to torch a house in Tal Rumeida, also written as Tal al-Rumeida .

The Palestinian neighborhood is located in the Israeli-controlled area of the old town, known as H2, where several hundred extremist Jewish settlers are based. Israel heavily restricts movement and activity of Palestinians in H2 area while allowing the settlers free movement and access.

The city of Hebron, which houses the Ibrahimi Mosque, is home to roughly 160,000 Palestinian Muslims and about 800 notoriously aggressive Israeli settlers who live in compounds heavily guarded by Israeli troops.

Israel has expelled the only international monitors protecting Hebron’s Palestinians from 800 heavily guarded settlers, one of whom committed the 1994 massacre that triggered their deployment.