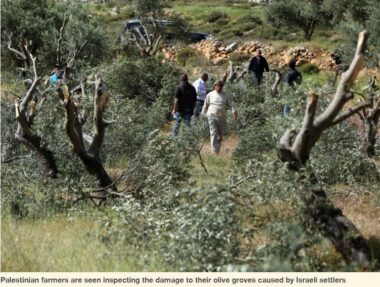 Meanwhile, Nasser Snubar, a farmer from Yatma village, south of the city, said that a group of settlers sneaked their way into his olive orchard, south of the village, and stole his harvesting equipment.

While the olive harvest season is meant to be a celebratory time in Palestine, the joyful time has become overshadowed by Israeli land restrictions and brutal settler attacks.

Settlers have recently stepped up their attacks against olive harvesters in the southern district of Nablus, attacking farmers of Burin town and preventing them from picking their olives. Similar attacks recently occurred in other Nablus-district villages and towns, including Sebastia, Aqraba and Deir al-Hatab.

Over 9,000 olive trees have been destroyed in the West Bank since August 2020, according to the International Committee of the Red Cross (ICRC), which called on Israel to ensure safe, timely, and adequate access for Palestinians to their olive groves in the occupied West Bank.

With more than 12 million olive trees planted across 45% of the West Bank’s agricultural land, the olive harvest constitutes one of the biggest sources of economic sustainability for thousands of Palestinian families.

According to UN OCHA, the olive oil industry supports the livelihoods of more than 100,000 families and accounts for a quarter of the gross agricultural income of the occupied territories.

But, as local NGO MIFTAH notes, “olive trees carry more than an economic significance in the lives of Palestinians. They are not just like any other trees, they are symbolic of Palestinians’ attachment to their land.”

“Because the trees are drought-resistant and grow under poor soil conditions, they represent Palestinian resistance and resilience. The fact that olive trees live and bear fruit for thousands of years is parallel to Palestinian history and continuity on the land.”