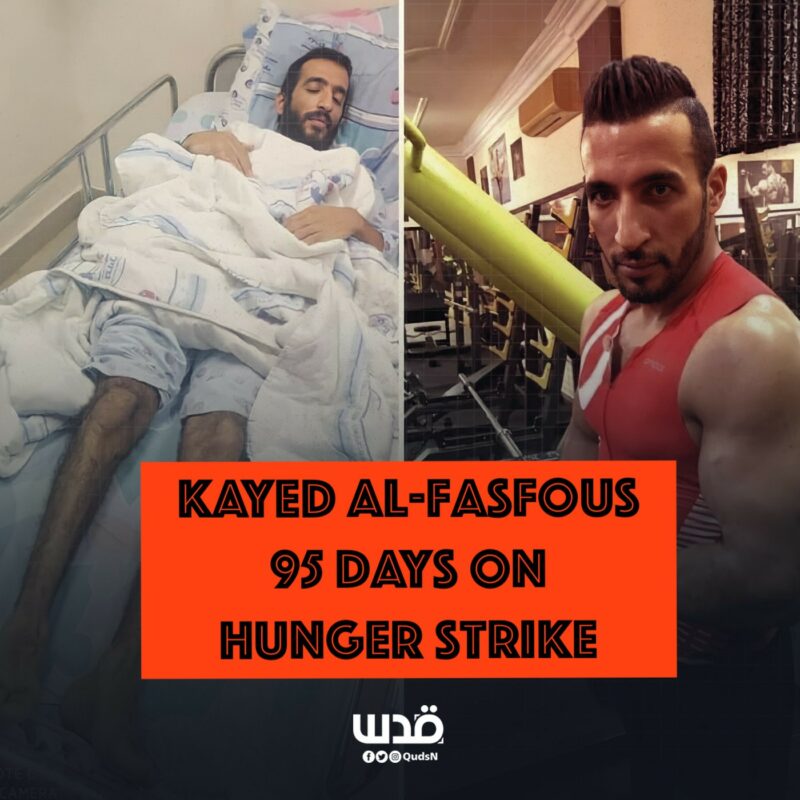 Palestinian prisoner Kayed Al-Fasfous, 31, has maintained his hunger strike for 95 days in opposition to being held under administrative detention by Israeli authorities, with no charges or trial.

The Detainees Affairs Commission reported, on Sunday, that Al-Fasfous, and six other prisoners are ongoing with their hunger strikes in protest of being detained without charges.

The other detainees are;

According to an October 13 report from Addameer Prisoner Support and Human Rights Association, on September 30, 2021, Addameer’s lawyer visited Al-Fasfous.

The lawyer stated that investigations revealed serious deficiencies in essential vitamins and a 35 kilogram weight loss, with a resulting weight of 59 kilograms.

Al-Fasous, was abducted by the Israeli army on October 15, 2020, he is is a married father of one child from Doura town, southwest of Hebron in the southern occupied West Bank.

As a result of malnutrition, he suffers from pain in his joints, headaches, and sleep deprivation from frequent inspections, noise, and disruption by Israeli prison guards. The Addameer defines Administrative Detention as;

a procedure that allows Israeli occupation forces to hold prisoners indefinitely on secret information without charging them or allowing them to stand trial. The secret information or evidence cannot be accessed by the detainee nor his lawyer, and can according to Israeli military orders, an administrative detention order can be renewed for an unlimited time. The court issues an administrative detention order for a maximum period of six months, subject to renewal.”