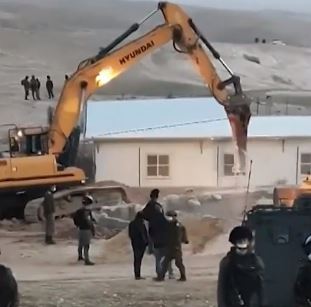 HEBRON, Wednesday, January 27, 2021 (WAFA) – Israeli forces dawn Wednesday demolished a mosque in the Bedouin community of Azwadeen, east of Yatta city, south of Hebron, according to a local activist.

Coordinator of the Protection and Steadfastness Committees, Fuad al-‘Amour, told WAFA that Israeli forces escorted bulldozers into Khirbet Umm Qassa in the Bedouin community of Azwadeen, in what is called the Eastern Slope, where the heavy machinery tore down the mosque, reducing it to rubble.

The demolition was carried out less than two weeks after soldiers posted demolition notices against the mosque and a local school, which serves 50 students from three marginalized communities, purportedly for being built without licenses.

Masafer Yatta is a collection of almost 19 hamlets that rely heavily on animal husbandry as the main source of livelihood.

It has been designated as a closed Israeli military zone for training since the 1980s and accordingly referred to as Firing Zone 918.

Israeli violations against the area include the demolition of animal barns, homes, and residential structures. Issuance of construction permits by Israel to local Palestinians in the area is non-existent.