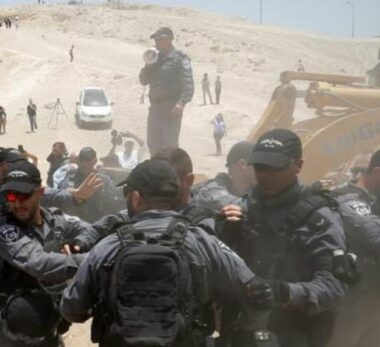 The spokesman for Khan al-Ahmar, Eid Abu Khamis, told WAFA that an Israeli military force stormed the community, and dismantled two structures used for cattle breeding and seized their contents, without even handing the owners any demolition notices in advance.

Khan al-Ahmar is one of the Palestinian communities Israel is threatening with demolition and forcible transfer in Area C, which constitutes 60 percent of the occupied West Bank and falls under full Israeli military rule under the terms of the Oslo Accords.

Israeli refuses to permit virtually any Palestinian construction in Area C, forcing residents to build without obtaining rarely granted permits to provide shelters for their families.

The community is also located in the E1 area, east of Jerusalem, where Israel plans to expand its colonial settlement blocs of Maaleh Adumin and Kfar Adumin and connect them to Jerusalem.

Expanding these settlements into E1 would isolate the northern and southern parts of the West Bank from one another, undermining prospects for territorial contiguity of a future Palestinian state and further cutting already heavily restricted Palestinian access to Jerusalem.

If the slated demolition and expulsion proceeds, this would mark the second time the community of Khan al-Ahmar is forcibly displaced.

The families were initially expelled from the Negev region by the Israeli military in the 1950s.