Army Abducts Young Man In Qalqilia, Injures Another Near Jerusalem 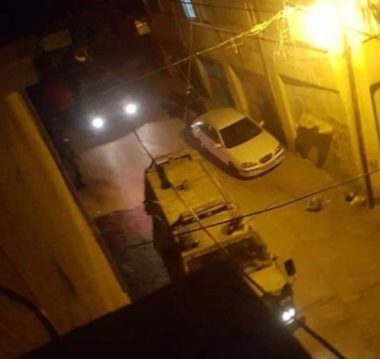 Israeli soldiers abducted, on Tuesday evening, a young Palestinian man in Qalqilia, in northern West Bank, and shot another near Jerusalem.

Media sources said several army jeeps invaded Qalqilia through the iron gates of the annexation wall, in the southern part of the city, before abducting a young man in Daoud neighborhood.

They added that the abducted Palestinian, Assef Azzam Odah, was riding his motorcycle when the soldiers stopped and abducted him, before moving him to an unknown destination.

In addition, the soldiers invaded Hizma town, northeast of occupied East Jerusalem, and fired many gas bombs, concussion grenades, and rubber-coated steel bullets at local youngsters who protested the invasion.

Medical sources said the soldiers shot a young man with a rubber-coated steel bullet, and caused many Palestinians to suffer the effects of teargas inhalation.

Earlier on Tuesday, the soldiers abducted 21 Palestinians, and injured many others, in several parts of the West Bank.