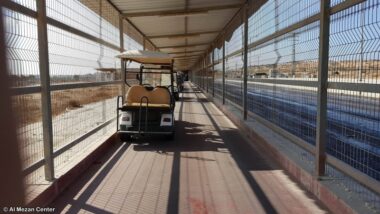 The Israeli authorities continue to use Erez crossing as a means to entrap Palestinians residing in Gaza, notably of those in urgent need of medical care, who are granted a permit only to face arbitrary arrest at the crossing. Patient permits and those of patient accompaniers are only granted in cases concerning a pressing humanitarian need.

In the most recent incident, occurring on Monday morning, 25 January 2021, the Israeli authorities at Erez Crossing arrested Walaa Mohammed Refaie, 35, despite having approved his request to accompany his wife to al-Makassed Hospital in Jerusalem. Refaie’s wife, 32-year-old Walaa Ayoub (Refaie), is a cancer patient who was granted an exit permit after receiving a referral to the hospital for treatment.

While passing through the security screening at the crossing, Mrs. Refaie was informed of her husband’s arrest. She was allowed to make the trip to the hospital unaccompanied. On the evening of the same day, Refaei told his wife by phone that he was being detained at Ashkelon Central Prison.

Al Mezan Center for Human Rights strongly condemns the arbitrary arrest and detention of Walaa Mohammed Refaei and the policies and practices of the Israeli authorities that hamper access to healthcare. By doing so, the Israeli authorities deviate from the fundamental rules and obligations pertaining to an occupying power under international law. Al Mezan also stresses that the physical and psychological pain that patients and their companions endure while attempting to access healthcare is a form of cruel, inhuman or degrading treatment or punishment.

Al Mezan reiterates its calls on the international community to ensure the respect of international law and to exert pressure on Israel, the occupying power, to ensure freedom of movement of goods and people, and uphold Palestinian patients’ right to healthcare and guarantee the safety of their companions.