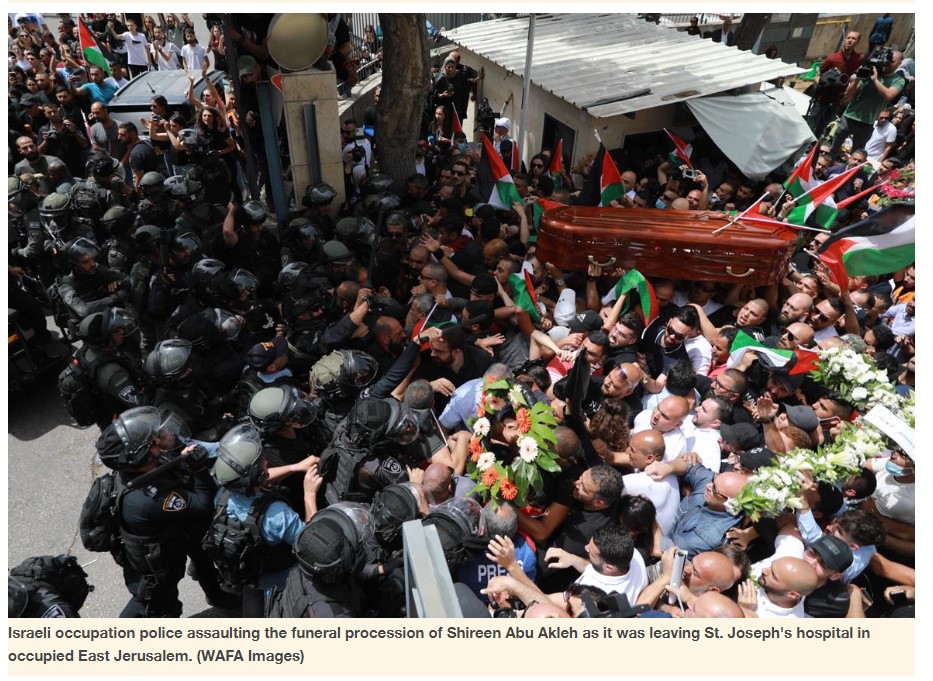 JERUSALEM, Monday, May 16, 2022 (WAFA) – The top church leaders in Jerusalem today condemned in a statement Israeli police brutality at St. Joseph’s hospital during the funeral of slain Palestinian journalist Shireen Abu Akleh, who was shot and killed by Israeli forces on Wednesday in Jenin while covering an army raid into the northern West Bank city.

“We, the Greek Patriarch of Jerusalem, the Latin Patriarch of Jerusalem, and the bishops and the faithful of the Christian Churches in the Holy Land, hereby condemn the violent intrusion of the Israeli Police into a funeral procession of the slain journalist Shireen Abu Akleh, as it was going from Saint Joseph Hospital to the Greek-Melkite Cathedral Church,” the church leaders said in a statement.

“Israeli Police’s invasion and disproportionate use of force, attacking mourners, striking them with batons, using smoke grenades, shooting rubber bullets, frightening the hospital’s patients, is a severe violation of international norms and regulations, including the fundamental human right of freedom of religion, which must be observed also in a public space,” added the church leaders.

“The St. Joseph Hospital has always proudly been a place of encounter and healing for all, regardless of their religious or cultural belonging, and it intends to continue to be so. What happened last Friday deeply wounded not only the Christian community, the Sisters of St. Joseph of the Apparition, the owner of the Hospital, and all the hospital staff, but also all people who in that place have found and still find peace and hospitality.

“The Sisters and the staff of St. Joseph Hospital will keep their commitment to being a place of healing.

“The tragic episode of last Friday makes this commitment even stronger than ever,” the leaders concluded their statement.