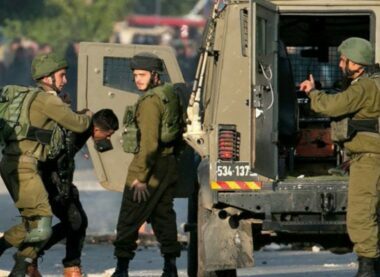 In Hebron, in the southern part of the West Bank, the soldiers invaded the eastern part of the city and abducted Mohammad Marwan Syouri from his home.

The soldiers invaded several homes in the area and violently searched them, causing damage, and interrogating many Palestinians while inspecting their ID cards.

Also, the soldiers abducted Adeeb Mustafa Sammoudi from al-Yamoun town, west of the northern West Bank city of Jenin, after stopping him at a sudden military roadblock between al-Yamoun and al-‘Arqa village.

On Monday dawn, the soldiers abducted seventeen Palestinians from several parts of the West Bank.