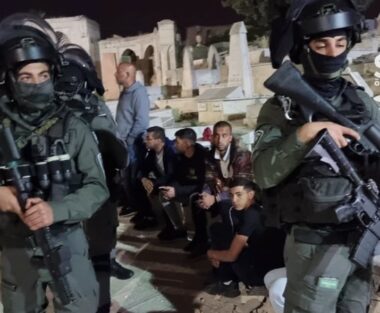 On Monday, Israeli soldiers injured dozens of Palestinians after the army attacked the funeral procession and ceremony of a Palestinian who died from serious wounds he suffered after the army shot him in Al-Aqsa Mosque in occupied Jerusalem.

The Wadi Hilweh Information Center In Silwan (Silwanic) said the soldiers attacked the funeral procession of Walid Sharif, 24, who died on Saturday morning of serious wounds he sustained on April 22nd after Israeli soldiers stormed the courtyard of the Al-Aqsa Mosque in Jerusalem.

The Palestinian Red Crescent Society (PRCS) said its medics provided treatment to 71 Palestinians, including one of its medics.

The PRCS added its medics and transferred thirteen wounded Palestinians to the hospital for further treatment. Most of the injured were shot in the upper body, including one who suffered an injury to his eye.

One of the wounded, the uncle of the slain young man, was shot in the face and is in critical condition.

The soldiers attacked the Palestinians in Salahuddin Street, the Mujahidin graveyard, and several other areas.

The soldiers used drones to fire gas bombs at the mourners and fired many rubber-coated steel bullets and concussion grenades, especially when they entered the graveyard carrying the slain young man.

The soldiers also attacked the Palestinian Red Crescent ambulance that was transporting the body of the slain Palestinian and fired rubber-coated steel bullets at it, shattering its windshield and some side windows.

After the funeral ceremony, the soldiers assaulted dozens of Palestinians, cuffed, and blindfolded many, forcing them to sit on the ground of the graveyard, and abducted twenty-five.