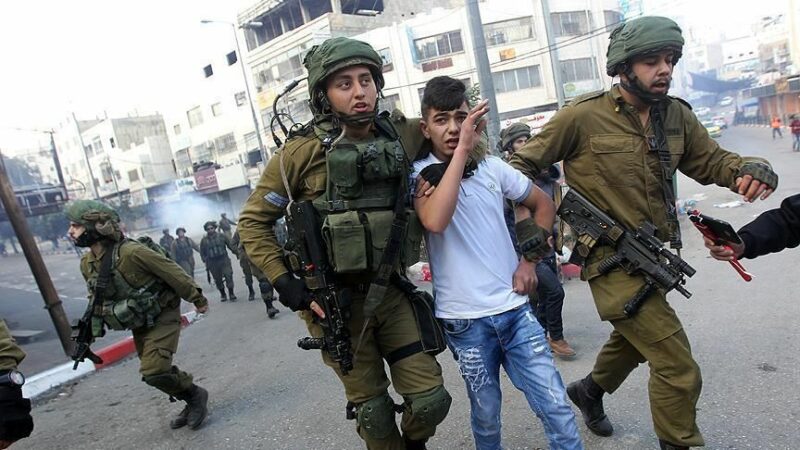 RAMALLAH, Saturday, November 20, 2021 (WAFA) – Marking World Children’s Day, the Ministry of Education and the Palestinian Prisoners’ Society (PPS) said today in two separate statements that Israel killed 15 Palestinian students and detained 1149 minors from the start of this year until the end of October and that two-thirds of the detained children have been physically tortured.

The PPS said that currently, 160 Palestinian minors are held in three Israeli prisons.

The Ministry of Education said while Israeli forces killed 15 students since the start of the year, they also detained 78 students during raids at their homes and schools, and that the Israeli occupation forces carried out 100 raids against schools, firing teargas and rubber and live bullets at the students, causing dozens of injuries.

The Israeli occupation authorities practice various forms of torture against detained children during and after their arrest, in a systematic and widespread manner, which is a grave violation of international law, especially the Convention against Torture and the Convention on the Rights of the Child, said the PPS in its statement.

It said that from the moment of their arrest, children undergo harsh interrogation. They are arrested at night from their homes, beaten in front of their families, handcuffed and blindfolded, kept without food or drink for long hours, subjected to interrogation without the presence of their families, undergo psychological and physical torture, forced to make confessions and sign papers without knowing their content, threatened and intimidated, subjected to interrogation by intelligence officers, and detained in interrogation centers for periods of up to two months.

The Prisoner Society said Israel delays granting families the necessary permits to visit their sons in prisons while many families are deprived of visitation rights.

The occupation authorities also put children in detention centers that lack the minimum standards of humanity, deprive many of them of their right to education and medical treatment, deny them the right to get clothing, personal items, and books, and penalize them at various times and for various reasons.

The PPS pointed out that minors from the West Bank are tried at military courts that lack basic guarantees for a fair trial, and without any consideration for the fact that their privacy as children should be protected, while the courts try a child as an adult after reaching the age of 16 years, not 18, as defined by the Convention on the Rights of the Child or by Israeli law itself for the Israeli child. The courts also calculate the age of the Palestinian child at the time of the ruling and not at the time of his arrest.

It said the Israeli occupation courts issue unfair sentences against minors following the amendments introduced to some laws related to Palestinian minors in which the courts can issue high sentences for acts of protest by minors and monitor their social media posts and try them on what they publish as a “security” offense.