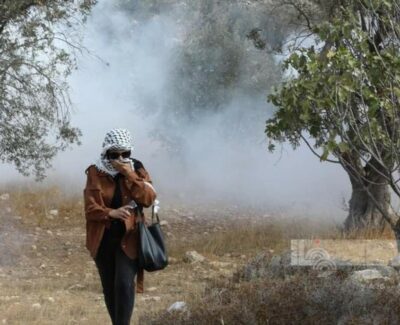 HEBRON, Saturday, October 22, 2022 (WAFA) – Hardcore Israeli settlers today attacked Palestinian farmers harvesting their olives in the village of At-Tuwani, to the south of Hebron in the occupied West Bank, according to local sources.

WAFA correspondent said Israeli soldiers assaulted and clamped down on Palestinian farmers and international activists who were helping them harvest their olives in the village.

He said Israeli soldiers stopped the vehicle of Mu’ayyad Shaaban, the Chairman of the PLO Colonization Resistance Commission, while on his way to the village to participate in the olive harvest and tried to prevent him from entering the village.

Confrontations also erupted in the village between Palestinians and Israeli occupation forces and settlers, as the latter shut down the entrance to the village and raided the lands of the local residents during the olive harvest.

The village is part of Masafer Yatta region, which the Israeli occupation authorities are trying to empty of their indigenous Palestinian population in favor of the colonial Israeli settlement enterprise.

Over the past month, Israeli occupation forces and colonial settlers have intensified their attacks against Palestinian farmers and their lands in the occupied West Bank, burning and destroying trees and sometimes preventing farmers from harvesting their olives at gunpoint.

The olive harvest season, which has just started, is one of the most important for thousands of Palestinian households in the occupied territories whose income depends heavily on the success of this season.