PCHR: “Escalation of Killings Due to Excessive Force: Palestinian Civilian Killed and 3 Others Wounded by Israeli Occupation Forces Fire in Jenin” 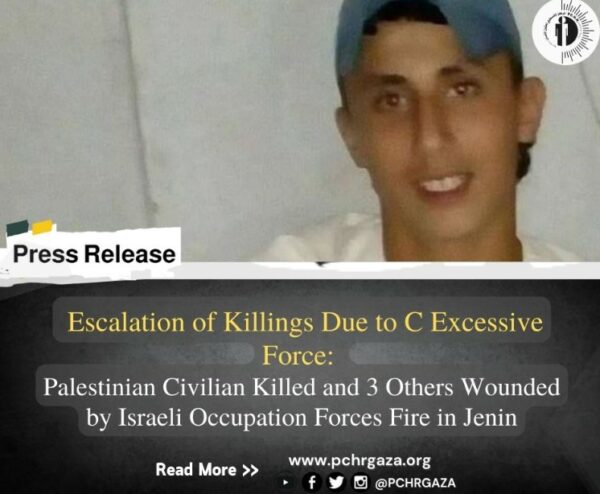 Date: 21 October 2022, Time: 10:00 GMT: The Palestinian Center For Human Rights: A Palestinian civilian was killed, and three others were wounded by Israeli Occupation Forces (IOF) fire during the latter’s incursion into Jenin, north of the West Bank.

This crime and other crimes committed during the past few days prove IOF’s excessive use of force and loose shooting standards against Palestinians upon top-level Israeli military and political orders.

Hardly a day passes without murders in the cities and villages of the West Bank, including Occupied East Jerusalem, as three Palestinians were killed last week, while since the beginning of October, 15 Palestinians have been killed; mostly were civilians, including five children and two teenagers.

According to investigations conducted by the Palestinian Centre for Human Rights (PCHR), at approximately 00:45 on Friday, 21 October 2022, an Israeli Special Force from “Yamam Unit” infiltrated into Jenin via two vehicles; one of them was a Mercedes truck and the other was a Volkswagen minibus and cordoned off a house belonging to Kifah Nazmi ‘Alawna (20) near al-Razi Hospital in central Jenin.

Moments later, many IOF’s military vehicles moved into Jenin, backed up the Israeli Special Force and some of them topped the high buildings’ roofs near the cordoned house before raiding it. Meanwhile, a number of Palestinians gathered and threw stones and empty bottles and empty carton boxes at the IOF vehicles.

Immediately, IOF fired live bullets at the Palestinians, wounding four them; one was seriously wounded in his neck. The wounded persons were taken to Dr. Khalil Suliman Hospital in the city. Moments later, the medical staff announced the death of Salah ‘Abdullah Breki (19), from Jenin.

Eyewitnesses said to PCHR’s fieldworker that Breki was wounded during IOF’s incursion into Jenin, as he along with other young Palestinians were on the street throwing stones at those IOF’s vehicles. IOF withdrew two hours after their incursion into the city and arrested Baraa’, the son of the raided and searched house’s owner.

So far in 2022, IOF attacks killed 145 Palestinians, including 101 civilians: 27 children, 8 women, 2 Palestinians killed by Israeli settlers and the rest were activists; 15 of them were assassinated.

Moreover, hundreds of others sustained wounds in IOF attacks, including women and children, across the Gaza Strip and West Bank. Also, five Palestinians, including a woman, died in the Israeli prisons.

PCHR reiterates its call upon the international community to take immediate action to end Israeli occupation’s crimes and double standards when it comes to international law and urges the ICC Prosecutor to act seriously with regard to the situation in Palestine.