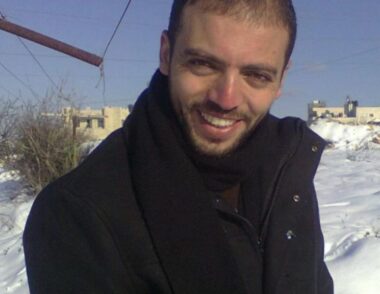 RAMALLAH, Saturday, August 13, 2022 (WAFA) – Despite his critical health condition, Palestinian detainee Khalil Awawdeh, 40, has been on hunger strike for 153 days in protest of his prolonged administrative detention without charge or trial by the Israeli occupation authorities.

Awawdeh, from the town of Idna in the southern West Bank district of Hebron, broke a 111-day fast last month after being reassured by Israeli prison authorities that his administrative detention would not be renewed, but he resumed the hunger strike a week later after the occupation authorities reneged on their promise not to end his unfair detention order.

On Thursday, the Israeli military court of Ofer allowed his lawyer and a physician to visit him for the first time in order to prepare a medical report about his health condition and submit it before the court next Sunday to look into his release.

Awawdeh, who is held in the Ramla Prison, is currently suffering from severe joint pains, headaches, severe dizziness and a blurred vision. He is also unable to walk and moves only on a wheelchair.

The father of four has been in jail since 27 December 2021, and has been placed in administrative detention, without charge or trial, ever since.

Currently, Israel is holding over 680 Palestinians in administrative detention, deemed illegal by international law, most of them former prisoners who spent years in prison for their resistance of the Israeli occupation.