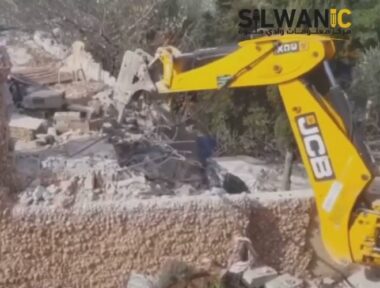 JERUSALEM, Thursday, January 14, 2021 (WAFA) – A Palestinian resident of East Jerusalem today self-demolished his house in Beit Hanina neighborhood to avoid paying high costs and fines after he received a demolition order from the Israeli municipality of West Jerusalem, according to the house owner.

Fawaz Abu Hamad, the house owner, said that he proceeded to demolish his house, built 10 years ago and inhabited by seven people, and to remove the rubble to avoid paying exorbitant costs and fines if the West Jerusalem municipality carries out the demolition itself.

He said that the demolition, as well as efforts to obtain a building license over the years, have cost him thousands of dollars and in the end, he was forced to tear it down under the pretext it was built without a permit.

Abu Hamad said that in his latest session with the municipality over a permit to his house, he was proposed to pay a fine of $10,000 in return for delaying the demolition for six months, which he did not agree to, considering that he spent years paying fines without getting a building permit.