Palestinian Teen Shot and Killed by Israeli Police Near Haifa 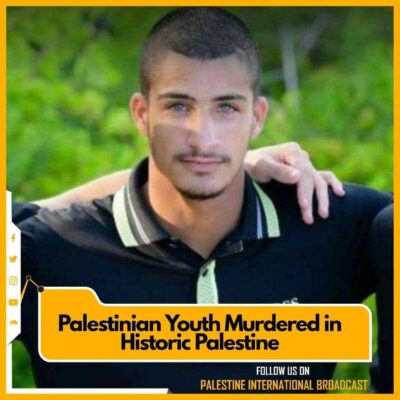 A Palestinian with Israeli citizenship, Bashar Zubeidat, 19, died Monday from wounds sustained on Friday, when he was shot by Israeli police with multiple live rounds.

In response to his murder, hundreds of Palestinians with Israeli citizenship too k to the streets on Tuesday to protest his death, and several other recent deaths of Palestinians at the hands of Israeli police and security forces.

On Monday, doctors at Rambam Israeli Hospital in Haifa reported that Zubeidat, from Basmat Tab’oun village, near Haifa, died from his serious wounds he suffered, on Friday, January 8, 2021.

Mossawa Advocacy Center for Rights Of Arab Citizens of Israel said it contacted the Investigation Department of the Israeli Police to obtain information about the fatal shooting, and was informed of the allegation that the slain young man was sitting in the passenger seat of a car, and that the driver tried to drive away when the police ordered him to stop. The Center also reported that, during the chase, the police fired many sporadic rounds of live fire at the car, and injured Zubeidat, before detaining two others who were in the car.

The Israeli Police claim that a car rammed a police officer who tried to stop the vehicle in Haifa, before fleeing the scene, and added that the police later located the vehicle, but the driver tried to flee before the officers opened fire again at the car. The police told reporters that they were later informed that two persons were injured and were receiving treatment at Rambam hospital.

Video of the protests that followed this police killing: