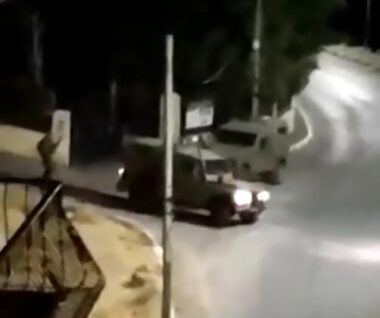 Israeli soldiers abducted, on Thursday at dawn, three young men near Jenin, one in Tulkarem, in northern West Bank, and one near Bethlehem, south of the occupied Palestinian capital Jerusalem, the Palestinian Prisoners’ Society (PPS) has confirmed.

The PPS office in Jenin said several army jeeps invaded Sanour village, south of the city, searched many homes and abducted Fares Najeh Ayasa and Daoud Gharbiyya, after storming and ransacking their homes.

The soldiers also invaded and violently searched the home of Fathi Jarrar, in Sanour, causing damage.

In addition, the soldiers abducted a former political prisoner, identified as Mohammad Nassif Ghawadra, after invading and searching his home in the eastern part of Jenin city.

In Tulkarem, the soldiers abducted a former political prisoner, identified as Rafat Abu Sharifa, 41, from his home in the eastern area of the city.

In Bethlehem, the soldiers invaded Beit Ta’mar village, east of the city, an abducted Jamil Mohammad Suman, 25, after invading his home and searching it.

The soldiers also invaded the areas of Rakhma, Harmala, Teqoua’ and Janata, east of Bethlehem, and searched homes.

On Wednesday evening, the soldiers abducted eight young men during protests that erupted after the army invaded the at-Tour town, in the occupied Palestinian capital, Jerusalem, in addition to two others near Hebron, in southern West Bank.